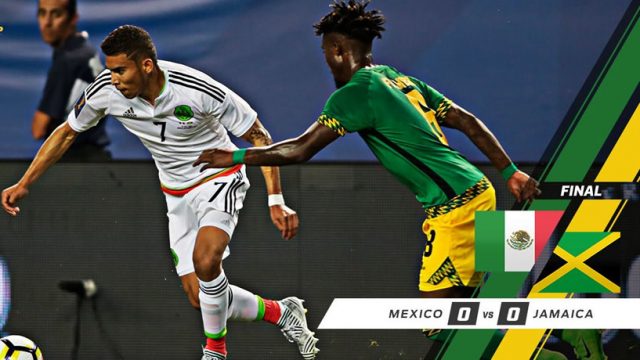 Jamaica played and held Mexico, the defending champions and Group C favorites, to a scoreless draw in the Gold Cup Thursday night in Denver.

Mexico dominated possession of the ball and was on the attack more often throughout the match, while Jamaica played defence and waiting for counter attack opportunities, few of which materialized. El Tri outshot the Reggae Boyz 14-5 at goal.

Team Jamaica has speed, athleticism and proven scorers that could have had opened the game up for goals, but displayed inefficient passing, either passing the ball to a Mexican player or out of bounds.

“I think the players were afraid to take risks,” Jamaica head coach Theodore Whitmore told reporters postgame. “It was a difficult game against a good team, so we welcome the point.”

Reggae Boyz and Mexico are both one point ahead of El Salvador, who defeated Curacao 2-0 in the day’s opening game.

It’s the second time Jamaican National Senior team got 0-0 result against the Mexicans, having done so in a World Cup qualifier inside the Azteca Stadium in February 2012.

“I think defensively, we were solid at the back,” Whitmore said postgame. “It wasn’t about individual performances. It was a collective effort from the guys at the back.”

The result gave each team a point in the standings, with both Mexico and Jamaica having four points, plus-2 goal differential, after two games to lead Group C. El Tri has scored three goals to the Reggae Boyz’ two overall. Mexico has the advantage, if only a slim one, if both teams hold serve and pick up three points each in the group finals on Sunday, July 16.

Mexico will play winless Curacao, while Jamaica will face El Salvador, which also has a shot at either winning the group or moving into second place.

The winners and runners-up from each of the three groups, plus the two best third-placed teams advance to the quarter-finals.