I AM A JAMAICAN
Home Sports HALF TIME: Mexico 0-0 Jamaica – Gold Cup Semifinal 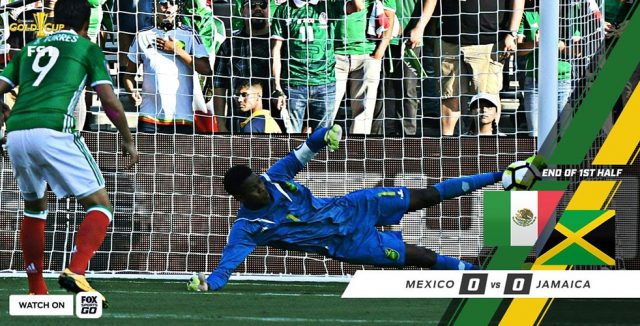 The Reggae Boyz and El Tri are squaring off in the Gold Cup semifinal round on Sunday at the Rose Bowl for a spot in the Gold Cup Final, just two years after Mexico beat Jamaica in the 2015 final. This is the 8th Gold Cup meeting between Mexico and Jamaica.

The BEST PLAY OF THE MATCH SO FAR: Two big saves from Andre Blake to keep Mexico off the scoreboard, keeping Jamaica’s hopes alive.

Both teams advanced out of the quarters on Thursday night. Jamaica got a standout performance from goalkeeper Andre Blake to defeat Canada 2-1, while Mexico recorded an early goal and held on to beat Honduras 1-0. This will be the second meeting between the countries this tournament after Jamaica held Mexico to a scoreless draw in Denver in the group stage on July 14.