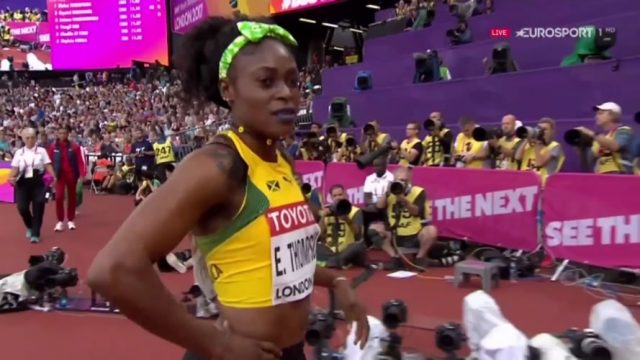 Elaine Thompson has qualified for the women’s 100m semifinal after winning her heat during the morning session of the London World Championships.

Thompson clocked 11.05 in heavy rain to win her race comfortably after an impressive start ahead of Canadian Crystal Emmanuel, who clocked a personal best time of 11.14.

Despite being hampered by an Achilles problem to the extent she had to ditch her spikes at last month’s Anniversary Games for a pair of trainers instead, Thompson is confident she can win her first world 100m gold as the world’s fastest woman on Sunday.

Natasha Morrison finished third in heat 6, qualifying for the 100m semifinals along with the winner Daryll Neita of Britain who won in 11:15. American Deejah Stevens finished second.

Olympic 100m silver medallist Tori Bowie of the United States has also made light of the rain to win heat 2 in exactly the same time as Elaine Thompson’s earlier victory, 11.05. Germany’s Gina Luckenkemper was the fastest qualifier with her personal best of 10.95 to win heat 1.

Jamaica’s  Jura Levy finished third 11.09 in heat 1 behind winner Germany’s Gina Luckenkemper, who was the fastest qualifier for the semifinals with her personal best of 10.95 to win the heat.