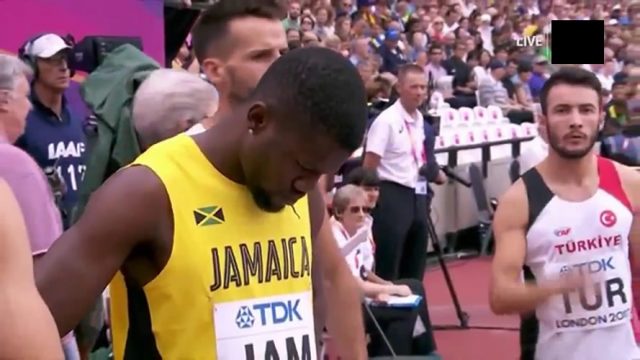 Jamaica’s 4x400m men’s relay team finished 4th in their heat thus faded out the automatic qualifying spot for the final.

The Jamaican team – Peter Matthews to Steven Gayle to Jamari Rose to Rusheen McDonald finished in 3:01.98, the 9th fastest time of the heats, which wasn’t fast enough to qualify as a non-automatic qualifier. The Bahamas – Olympic champions in this arena five years ago – also fail to qualify from the first heat.

The top five finishers in the second heat of the 4x400m were all faster than the first heat winners. The United States were missing some of their big hitters but they still progressed through in a world-lead of 2:59.23 ahead of Trinidad & Tobago (2:59.35) while a triumvirate of Borlees helped Belgium into the final by right with 2:59.47. Despite the chants of ‘Roo-ney’ echoing around the arena on the last lap, the British team with Martyn Rooney on anchor dropped back to fourth but still qualified on time with 3:00.10 along with France (3:00.92).

Botswana were tipped by many for a medal before the championships but a disastrous changeover between Nijel Amos and Karabo Sibanda put paid to their already slim chances of qualifying. They trailed in sixth in 3:06.50, one place ahead of Japan in 3:07.29.