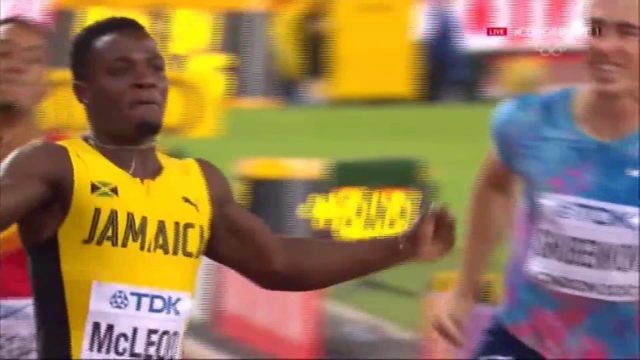 Omar McLeod, 110m Olympic Champion, has made history as the first Jamaican to win gold in the Men’s 110m hurdles at the World Championships. Watch the video below.

McLeod is also the first Jamaican to hold both the 110m Hurdles World and Olympic title simultaneously. He clocked 13.04 to beat the world record holder Aries MERRITT and the Olympic silver medallist Orlando ORTEGA.

McLeod and Bolt could also join forces at the end of the championships in the 4x100m. McLeod is the only sub-13-second hurdler in history to have broken the 10-second barrier for 100m and after the semifinals, he said he might be brought into the fray on Saturday.

Omar McLeod is the second man in HISTORY to win the 110m Olympic and World GOLD back to back. American Allen Johnson was the first to do so in 1997, an Olympic champion who followed up with a world title in the following season.

He clocked a world-leading time, new personal best, and the fifth fastest time [12.90] in 110m Hurdles’ history all in one race at the Jamaica National Senior Trials in Kingston last month.

Hansle Parchment, who won silver for Jamaica at the 2015 World Championships, finished last.