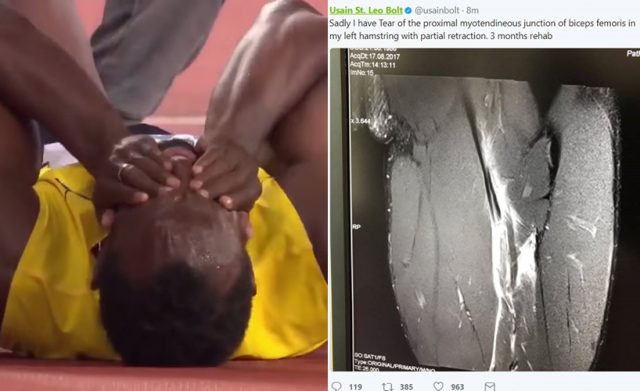 Usain Bolt has shared a picture of a medical scan showing a torn hamstring after he felt compelled to silence people doubting he’s injured.

Bolt spent two of the next three nights partying in the British capital after he pulled up in the 4x100m final at the IAAF World Championships last week, causing some to suggest that Bolt faked the injury to excuse his rare failure.

“I don’t usually release my medical report to the public but sadly I have sat and listened to people questioning if I was really injured,” Bolt began with the first of four tweets on Thursday, then later deleted them. The torn hamstring requires three months of rehab.

“I have never been one to cheat my fans in anyway & my entire desire at the championship was run one last time for my fans,” Bolt said after sharing the photo. “Thanks for the continued support my fans and I rest, heal and move onto the next chapter of my life”.

The 30-year-old has also had to pull out of a Manchester United Legends’ game against Barcelona at Old Trafford on September 2 as a result of the injury.