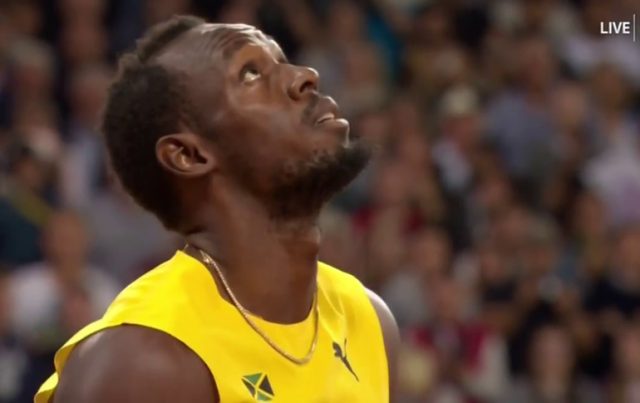 Usain Bolt will be competing for Jamaica one last time in the men’s 4x100m relays at the London World Championships before retiring on Saturday.

Bolt will anchor leg for Jamaica’s men’s 4x100m relay team to help win Jamaica’s 2nd gold medal at these championships and his 12th gold medal of the World Championships. However, the team will be without the ‘Sub-10 king’, Asafa Powell, who did recover in time to prove his fitness after withdrawing from the Senior Championships in June.

Jamaica’s starting line-up for the men’s 4x100m relays – Tyquendo Tracey to Julian Forte to Michael Campbell to Usain Bolt – will compete on Saturday morning, 5:55 am E.T. / 4:55 am Jamaican time, running from lane 3 in the second heat of the qualifying round for a spot the final, which is scheduled to start in the evening at 4:50 pm E.T/ 3:50 pm Jamaican time. It’s likely Yohan Blake will run the second leg in the final.

The U.S. is expected to be Jamaica’s primary competition, though it hasn’t beaten the Jamaicans in a global championship relay since 2007.

The Jamaican team for the women’s 4x100m relays heat – Christania Williams to Natasha Morrison to Jura Levy to Sashalee Forbes on anchor leg – will run in lane 5 at 5:44 am E.T. /4:44: am Jamaican in heat two. Sprinting star Elaine Thompson is expected to lead the team in the final.