I AM A JAMAICAN
Home Sports Wayde van Niekerk cries on TV, says he hasn’t had the respect... 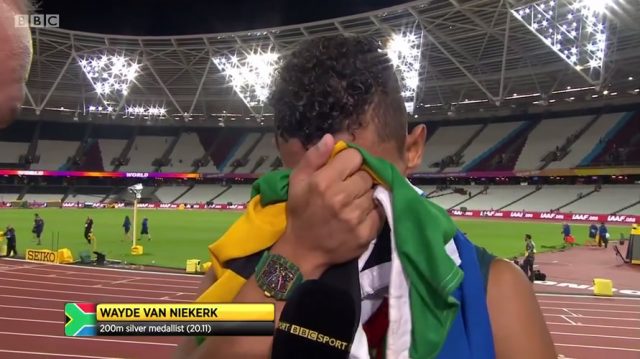 An emotional Wayde van Niekerk says he hasn’t got the respect he deserves after winning the Men’s 400m gold on Wednesday at the World Championships in London.

Wayde Van Niekerk, the reigning world and Olympic 400m champion, cried during an interview with BBC Sport after losing the Men’s 200m to Ramil Guliyev of Turkey, revealing that a lot of people felt he didn’t deserve to the win the Men’s 400m title.

There are those saying Botswana sprinter Isaac Makwal was forced out 400m final so Wayde would win. Makwal, the world’s second best 400m runner was thought to be one of at least 30 athletes and team members infected in a suspected norovirus outbreak. He was physically barred from entering London Stadium for Tuesday’s 400m final.

Exclusive: Isaac Makwala is blocked from the athletes' entrance at the London Stadium. He's being escorted to IAAF office #London2017 pic.twitter.com/c5FjfNxQlG

He was then prevented from running in Monday’s 200m heats before the International Association of Athletics Federations (IAAF) granted Makwala a special qualification race, allowing the athlete to run solo in front of a packed stadium in an attempt to qualify for the 200m semifinal. He did and also qualified for the final the following day.

However, van Niekerk seemed to be in a better mood during the IAAF’s post-200m race interview.

Ramil Guliyev is the surprise winner of the men’s 200m title in, earning Turkey’s first gold medal at the IAAF World Championships. Guliyev denied the world and Olympic 400m champion Wayde Van Niekerk a world double by 0.02sec, with bronze going to the 23-year-old Jereem Richards, who is just a thousandth of a second behind the South African.