I AM A JAMAICAN
Home Sports Usain Bolt: “I thought I was going to die…The first lap was... 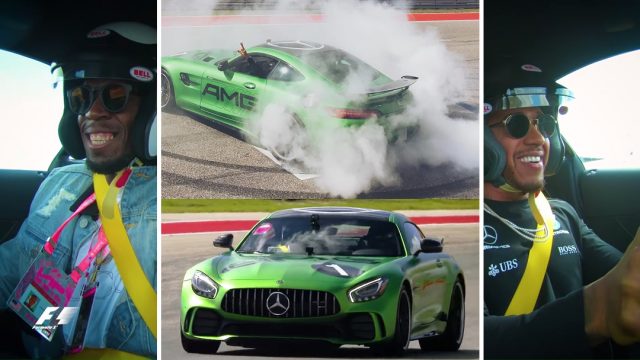 Usain Bolt experienced terrifying speeds on four wheels around the Circuit of the Americas in Austin, Texas, during a spin with 3-time Formula One World Champion Lewis Hamilton on Sunday.

Watch Bolt grab onto his seat as Hamilton takes him for two terrifying laps in a Mercedes-AMG GT4 at the US Grand Prix. Watch on YouTube.

Bolt – who later waved the green flag to start the formation lap for the US Grand Prix- revealed the experience of being in the Mercedes AMG road car was far from enjoyable.

“There are no words to describe it,” Bolt said. “The g-force on that was real. It was stressful. “The first lap was aggressive and good and then when he took the traction control off I thought I was going to die,” the legend added.

31-year-old Bolt is looking to a future in football, saying: “For me, it’s a personal goal. I don’t care what people think about it. I’m not going to lie to myself. I’m not going to be stupid.” The Olympic and World icon retired following the World Championships in London in August when he pulled up with a hamstring injury.