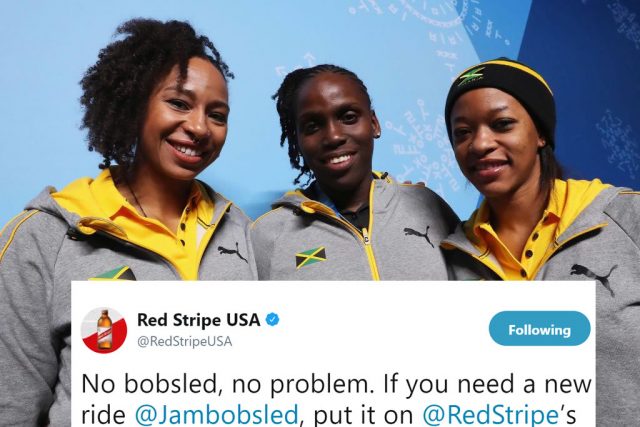 Red Stripe USA has offered the Jamaica women’s bobsleigh team a bobsled following reports of a dramatic dispute where a former coach, who quit yesterday, said that she is legally responsible for the instrument.

According to reports from BBC Sport, German Sandra Kiriasis, who won Olympic gold in 2006, wanted payment for the sled but the Jamaica Bobsleigh Federation declined and is disputing she owns the sled.

Kiriasis said she had to quit after refusing to change roles from driving coach to track performance analyst, which would have given her no access to the athletes. She also reportedly said it was her contacts which led to the team securing the sled.

However, with the sled situation being unresolved and the women eager to compete on Saturday, February 17th, in the two training heats of the women’s Bobsleigh, in a tweet this morning, Red Stripe USA offered to foot the bill for a sled:

The Jamaican team participation comes 30 years after men’s bobsleigh team made a historic appearance at the 1988 Calgary games, a feat that provided the inspiration for the 1993 movie “Cool Runnings.”