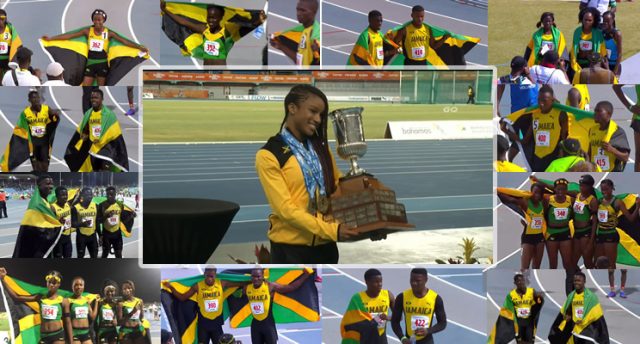 Team Jamaica won a total 82 medals and set numerous championships records at the 2018 CARIFTA Games at the Thomas A Robinson stadium in Nassau, Bahamas — March 31- April 2. The Jamaican junior athletics team secured the championship title for the 34th consecutive year and 42 times in the games’ 47-year history.

Jamaica’s 82 medals include 43 gold, 28 silver, and 11 bronze compared to the 86 medal won last year. On the medal table, Team Jamaica is 47 medals clear of nearest rival The Bahamas with 35 (6 gold, 14 silver, and 15 bronze medals). Trinidad and Tobago are placed third with 17 medals, of which are 4 gold, 6 silver, and 7 bronze medals.

Briana Williams was named the Austin Sealy Award winner for her outstanding performances, becoming the Under 17 girls sprint double champion. The 16-year-old won Gold in the Girls Under 17 100m, 200m, and the 4x100m, setting a new meet record for the relay.