I AM A JAMAICAN
Home Sports Watch: Usain Bolt scores his first goal as a professional footballer 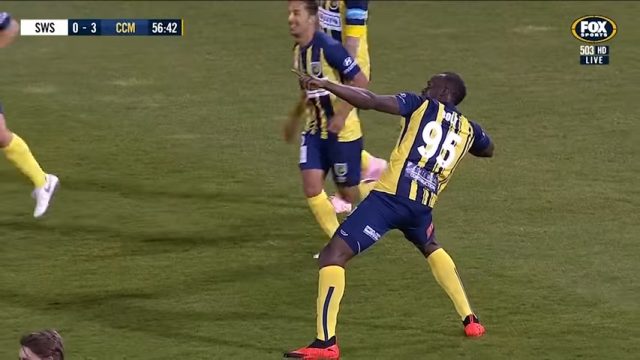 Usain Bolt scored his first goal as a professional soccer player Friday night in Australia. Then, less than 15 minutes later, he added another.

In his first start with the Central Coast Mariners of the Australian League, the legendary sprinter scored in the 55th and 69th minutes, helping lead his team to a 4-0 win in their friendly against Macarthur South West United.

“It was a big deal. Scoring a goal in your first proper match … it’s a good feeling,” Bolt said afterwards, according to The Sydney Morning Herald. “I’ve been improving quickly, I personally feel.”

Bolt scored his first professional goal after controlling a ball in the box and sneaking it past the near post, while his second goal was the result of a defensive miscue; The opposing goalkeeper collided with a defender while going for a ball, leaving Bolt with a completely open net for an easy tap-in.

The eight-time Olympic gold medalist then left the game in the 74th minute.