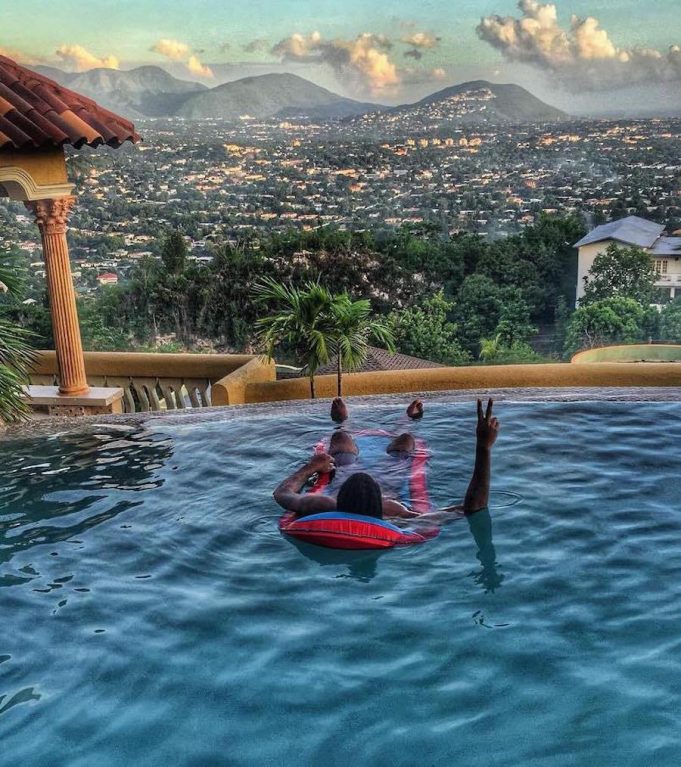 West Indies cricketer Christopher Henry “Chris” Gayle has been considered one of the greatest big hitting legends in limited overs cricket, Gayle has set numerous world records in all formats of the game. The legend has shared views in, around and from his CG333 Mansion in St. Andrew, Jamaica.

Gayle is one of the most exciting cricket players on the planet and, judging by his Instagram account, his life away from the cricket pitch is pretty incredible as well.

The photo above shows a glance of the front of the CG333 mansion.

“Such a beautiful day in #Kingston #Jamaica Bedroom View… Could see the airport where my private jet parked.”

Gayle is one of the most entertaining players in the world and is the neutral’s favourite due to his laid-back disposition.

He is also one of only four players who have scored two triple centuries at Test level: 317 against South Africa in 2005, and 333 against Sri Lanka in 2010.

He is known as a big hitter; in 2012, he became the first player to hit a six off the first ball of a Test match. Playing for Royal Challengers Bangalore, he scored a 30-ball century, which became the highest individual T20 score (175 not out). At the launch of the Caribbean Premier League, he was announced as the first franchise player in the league.

Chris Gayle became the first batsman in World Cup history to score a double century when he reached 200 off 138 balls during the 2015 Cricket World Cup versus Zimbabwe.

“Y’all know when I ‘m travelling I have to keep the Country flag flying.”  ??

“My favourite thing in life doesn’t cost any money. The most precious resource we all have is Time ~ Jobs. #UseItWisely I live the life I deserve! I’m Waayyyyyyyy Up!#IFeelBless Have a good weekend peeps!”

“My Sunday… about to get my massage.”

“It’s been a long couple days… Today is just #Rest&Relax at home, ain’t moving…. But of course, friends are here so I’m sorry for these bottles of RUM!”

“I will fall asleep and my friends will take pictures of me saying I’m drunk…just to let y’all know, I’m not! I’m just tired and need quick sleep”

“Ready for the Friday!”

“The sky has never been the limit. We are our own limits. It’s then about breaking our personal limits and outgrowing ourselves to live our best lives.”

“Day1 #training #fitness#steps. Had a nice session, legs literally still shaking from the run – time for shower then breakfast.”

Watch Chris Gayle show how he parties at the ‘CG333’ mansion Kingston Style.