I AM A JAMAICAN
Home Culture Watch: How This Jamaican Makes A Living Diving From 85-foot Platform at...

Negril, Jamaica — Rick’s Cafe, one of the world’s top-10 rated bars, is a great spot to go for a cocktail, great food, listen to a live reggae band and get a breathtaking view of the Negril sunset after cliff jumping. But thousands of people, mostly tourist, also visit the attraction to see the cliff divers jump from the 85 feet platform.

Last October, we shared the video below of diver Korey “Spider Man” Wilson, 37, which has since garnered 2.9 million views and counting. The video shows Wilson, who has been working at Rick’s for 22 years, diving with a GoPro video camera in hand, capturing the spectacular birds-eye view and his daredevil experience. Watch Spider Man go.

It may look like the mesomorph divers are simply there to entertain the crowd. But what many may not know is that they act as lifeguards, security guards, and voices of reason for the occasional inebriated partier who thinks that it’s a good idea to jump from the 45-foot cliff, or for the first-time jumper who wants to take the plunge, but freezes upon seeing the dizzying waters far below. The divers are also family men who used the sport to escape from the harsh realities of Jamaica.

“It’s a way of life,” Wilson told Kim Constantinesco of Purpose 2 Play in an interview. “It takes ourselves out of certain situations. It takes us away from crime, and helps us move our way up to something great in life.” Wilson’s teammate, Darren Witter, 34, who started cliff diving at 8-years old said:

It’s kept me away from a lot of negative people who want to do bad stuff. It’s allowed me to achieve things that I never used to. I was born in the country. Diving for me is more than good. It’s great…This is how we make our living. It helps make us a better man in life.

While Witter loves his diving career and often contemplates if he’s too old to compete at a higher level, his family isn’t so certain about his career choice. In fact, even though hundreds of thousands of people have witnessed Witter dive over the years, his parents, despite living in Negril, haven’t seen their son perform live. “If my mom were to see, she would be freaked out,” Witter said. “My dad has only seen in on camera. They aren’t really into the diving.”

After all, the sport inherently has its dangers. The risk for human error is great even for the best in the business.

“I was doing a backflip from the high one and I landed on my back and I was knocked out. I hurt my sternum on that one. We don’t want any injuries. You don’t want to go to the hospital here,” Wilson said.

While Witter loves being a diver, Wilson has conflicting feelings. Wilson is raising a son and sees his job as just that — a way to earn a living and raise his family.

Wilson said that he will teach his son how to dive for fun, but as for his son doing it professionally?

“I wouldn’t feel good about that. Trust me,” Wilson said. “He says he wants to be a doctor, so I’m glad he’s going to be a doctor.” 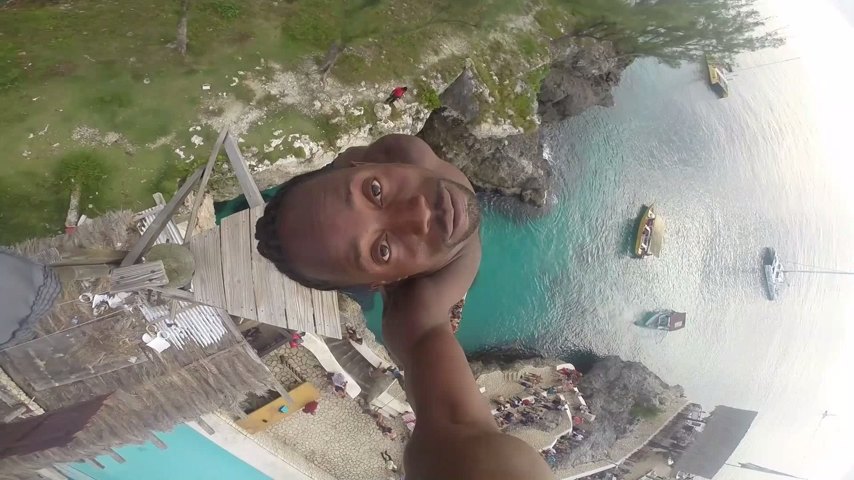 Wilson doesn’t just want more for his son in life. He wants more for himself as well. “I want to go back to school and study food and nutrition,” Wilson said. “My purpose in life is to be alive, be healthy, and take care of my kids. My purpose is to live a peaceful life even though there is temptation all around.”

Witter has a similar “live simply” approach to life.“Wherever life takes us, that’s where we want to be,” Witter said.

Living freely, loving greatly, and slowing down enough to enjoy life is the Jamaican way of life in a nutshell.

So if you find yourself on the island, live freely, love greatly, slow your pace, tip your driver, and also be sure to tip the divers when you visit. They’re helping you paint your vacation and your life with strokes of awe, beauty, and excitement. They’re also showing you that occasionally, it’s okay to climb high and dive deep in life.