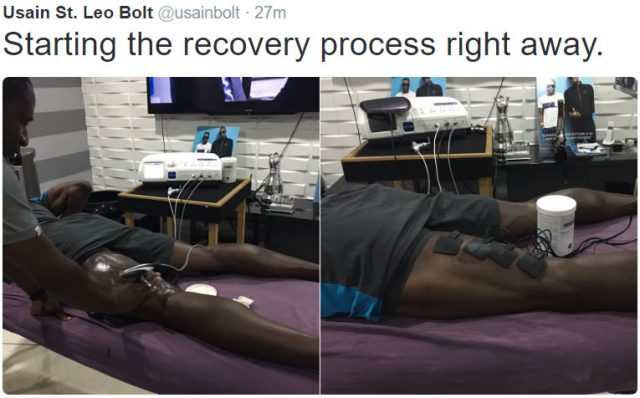 Usain Bolt has started the recovery process following a ‘Grade 1 tear’ to his Hamstring Injury. Usain Bolt withdrew from the Jamaica Olympic Trials/Jamaican Senior Championships on Friday — held June 30 – July 3 at the National Stadium in Kingston — just minutes before the Men’s 100m final, which Yohan Blake won in 9.95.

He said in a statement that he was examined by the Chief Doctor of the National Championships and diagnosed.

Initial reports cited Bolt withdrew due to an ‘unspecified injury’ and that the legend applied for a medical exemption which was granted by The Jamaica Athletics Administrative Association (JAAA), the national governing body for the sport of athletics / track and field in Jamaica, after his run in the Men’s semi-final.

Bolt will not compete in the 200m on Saturday but could still compete in Rio. The Jamaica Athletic Administrative Association selection policy allows for medical exemptions, so long as athletes can prove the injury prevented them from competing at the trials. The medical exemption requires that he must prove his fitness before July ends. Bolt ran 9.88 in the 100 meters at Racers Grand Prix in Kingston on Jun 12 after stumbling at the start. Jimmy Vicaut of France is the only other runner with a faster time this season, running a wind-assisted 9.86 in early June.

The Jamaican Senior Championships is used to select the national team to represent and compete in the 2016 RIO Olympics between August 5 and 21 — unlike the IAAF World Championships, no wild cards are available. We’ll update this story as more information becomes available.