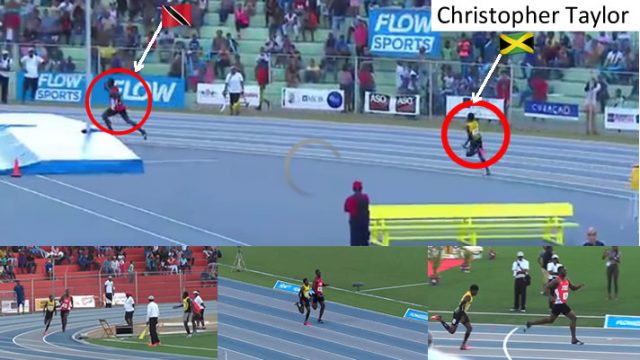 Christopher Taylor made a remarkable effort to win the gold medal for Team Jamaica when he chased the Trinidadians in the Boys’ 4 x 400m Under-20 Relay race on the final of the 2017 CARIFTA Games in Curacao.

The Jamaican team had poor baton changes on the second and third legs to Taylor, leaving him 30 meters behind Trinidad on the anchor leg of the race. After receiving the baton, Taylor, who won the 400m gold medal, hunted down the Trinidadian around the 400m track but had to settle for the silver medal after struggling shoulder to shoulder 30 meters to the finish line.

Team Jamaica won a total 86 medals at the 2017 CARIFTA Games in Curacao — April 15-17.  The Jamaican junior athletics team secured the championship title for the 33rd consecutive year and 41 times in the games’ 46-year history.

CARIFTA may not provide the stiffest of competition for our athletes, but it does render invaluable experience for them to compete against athletes within Caribbean region and for their country — not only at the Inter-Secondary Schools Boys’ and Girls’ Championships (CHAMPS) for their school.

For many of these athletes, CARIFTA will be their only opportunity to represent their country. Some of whom will choose to concentrate on other careers while some will not progress sufficiently in the sport to make a senior National team. We must also remember that Jamaica is the capital of track and field in the region, and as such part of our duty is to help to develop the sport in our region. The best way to do that is to allow the young athletes to compete to against our sister islands.