I AM A JAMAICAN
Home Sports Jamaica, El Salvador advance to quarterfinals after 1-1 draw – CONCACAF... 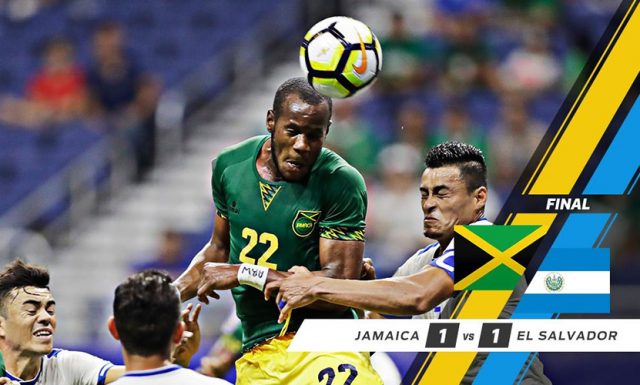 The Reggae Boyz have advanced to the quarterfinals of the CONCACAF Gold Cup after a 1-1 draw with El Salvador on Sunday which put them on top of group C (for now) with 5 points.

Jamaica almost scored in the first minute, but it’s El Salvador who took the halftime lead with Nelson Bonilla’s goal. El Salvador has also qualified for the knockout stage.

Darren Mattocks scored a penalty to equalize for Jamaica. Mattocks is now Jamaica’s top scorer in CONCACAF Gold Cup History with 4 goals. This 14th goal for Jamaica makes him Jamaica’ 9th top scorer for his country.

Regardless of the result in the Mexico vs Curacao game, Jamaica’s quarterfinal game will be played on Thursday, July 20th at the University of Phoenix Stadium in Glendale.