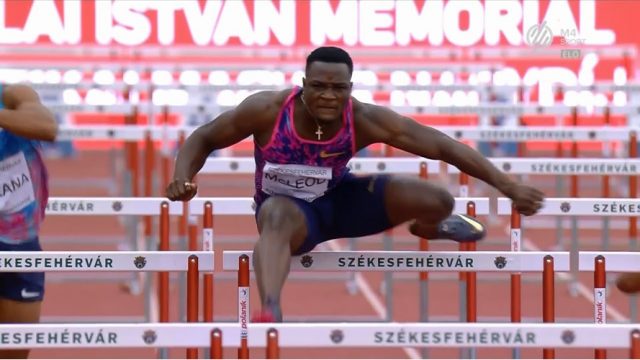 Omar McLeod clocked 12.96 in the Men’s 110m Hurdles at the Istvan Gyulai Memorial in the Hungarian city of Székesfehérvár today, Tuesday, July 4.

McLeod ran an impressive race with a +0.3m/s tailwind to smash the meeting record in his first race since his surprise loss at the recent IAAF Diamond League meeting in Paris.

The Jamaican got out well but struggled to shake off the challenge of world champion Sergey Shubenkov. McLeod eventually managed to edge ahead to take the victory in 12.96, just 0.06 shy of the recent national record he set when winning the Jamaican title.

Shubenkov crossed the line in 13.01 to finish second, his second-fastest time, while world record-holder Aries Merritt was third in 13.11. Much to the delight of the crowd, Hungary’s Balazs Baji broke his own national record in fourth, clocking 13.15.