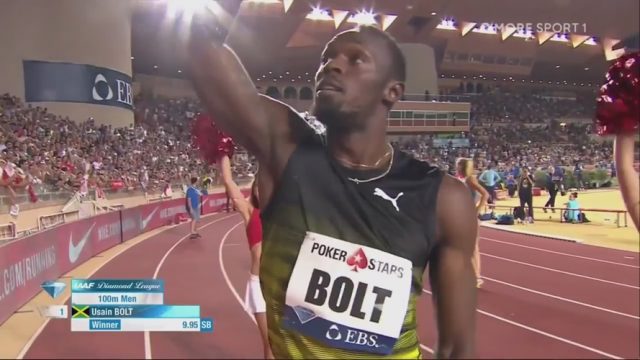 Watch the video below: Usain Bolt has won his final 100m race before the World Championships at Friday’s Diamond League meet in Monaco, beating a field that included two of the five fastest men in the world this year.

The Jamaican will retire after competing in the 100m and 4x100m worlds in London in August.

There were doubts about Bolt’s form with worlds in two weeks. He failed to break 10 seconds in his first two races this season in June before seeing his German doctor to work on his chronically balky back.

Bolt opened his final track season with a winning time of 10.03 at the Racers Grand Prix at the National Stadium in Kingston on June 10th before winning his second race at the Golden Spike track meet on June 28 in Ostrava, a city of the Czech Republic, with a time of 10.06.

Fortunately for Bolt, nobody else is performing that well this season, either. None of his top rivals in recent years — Yohan Blake, Andre De Grasse and Justin Gatlin — have broken 9.90 seconds this season.

The Monaco field included two of the five fastest men in the world this year — South African Akani Simbine and American Chris Belcher — and four men overall who have broken 10 seconds in 2017.