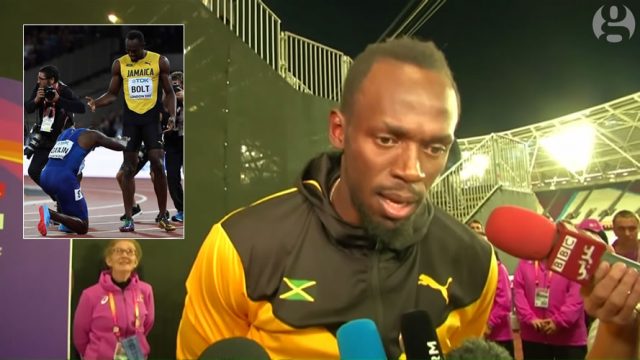 Usain Bolt says that Justin Gatlin deserved to win gold in the men’s 100m at the World Athletics Championships in London.

The Jamaican sprinter finished third in Saturday’s final to take bronze. ‘If you don’t show up on the night he will beat you and, for me, I didn’t show up tonight,’ says Bolt.

Justin Gatlin took a bow in front Usain Bolt, showing his utmost respect for the icon for the world see before the two hugged it out on the track after the race.

The men’s 100m medal ceremony which was originally scheduled to be held at 8 pm local time, has now been moved to 6:50 pm before the evening programme starts, as reported by The Guardian‏, citing the IAAF does not want to see a full stadium booing Justin Gatlin and the American national anthem.

Usain Bolt also had a message for his London fans when BBC’s Iwan Thomas caught up with him after his final competitive 100m race on Saturday.