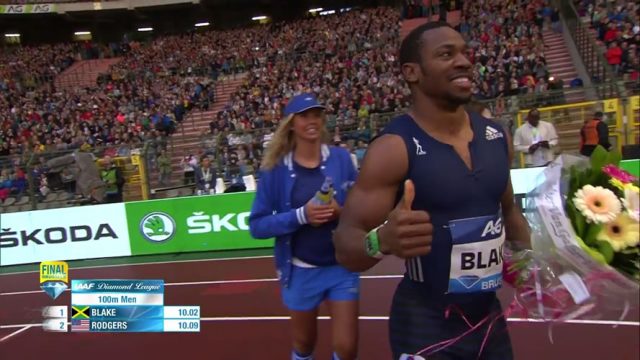 Yohan Blake has won the men’s 100m at the Brussels Diamond League, his second consecutive victory since the recently concluded World Championships. Watch the video below.

Blake clocked 10.02 to win ahead of American Mike Rodgers 10.09, who he beat at the IAAF Zagreb World Challenge in Croatia on Tuesday. Julian Forte finished third with a time of 10.12. Asafa Powell, whose season best is 10.08,  finished fourth in 10.18.

Asafa Powell, Guinness World Record Holder for the most sub-10 times over 100m in the history of Track and Field, finished 7th at the Zurich Diamond League last week before finishing third at the IAAF Zagreb World Challenge in Croatia on Tuesday.