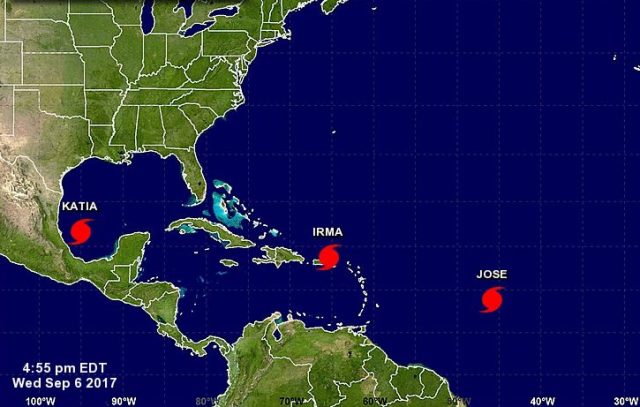 The Atlantic now has 3 hurricanes active at the same time: #Irma, #Jose and #Katia. The last time this occurred was September 16-17, 2010.

The Atlantic record for hurricanes at the same time is 4: this occurred both in 1893 and 1998. A total of six Atlantic hurricanes have formed since Aug 7 – tied with 1893 for most hurricane formations on record between August 7- September 6.

As of 5pm E.T., the eye of Category 5 Hurricane Irma is moving away from the Northernmost Virgin Islands. Irma has now maintained 185 mph winds for 36 hours – no Atlantic or eastern Pacific #hurricane has ever stayed this strong for so long. It’s only 5mph weaker than the strongest hurricane ever recorded, Allen.

Irma is moving toward the west-northwest near 16 mph (26 km/h), and this general
motion is expected to continue for the next couple of days. On the forecast track, the extremely dangerous core of Irma will pass just north of Puerto Rico tonight, pass near or just north of the coast of Hispaniola Thursday, and be near the Turks and Caicos and
southeastern Bahamas by Thursday evening.

The center of Hurricane Katia was located near latitude 21.7 North, longitude 95.1 West. Katia is moving toward the southeast near 3 mph (6 km/h). Little overall motion is anticipated through tonight, but a southwestward drift should begin tomorrow.

Data from the Hurricane Hunter aircraft indicate that the maximum sustained winds have increased to near 75 mph (120 km/h) with higher gusts. Some additional strengthening is forecast during the next 48 hours.

Hurricane #Jose quickly strengthened today and became a Hurricane. There are no coastal watches or warnings in effect.

The center of Hurricane Jose was located near latitude 13.9 North, longitude 45.8 West. Jose is moving toward the west-northwest near 16 mph (26 km/h), and this general motion is expected to continue for the next couple of days.

Maximum sustained winds have increased to near 75 mph (120 km/h) with higher gusts. Additional strengthening is forecast, and Jose could be near major hurricane strength on Friday.