I AM A JAMAICAN
Home Music Usain Bolt Willing to Pay Any Jamaican Producer To Record This Man’s...

On Monday, Usain Bolt posted a video of man singing, paying tribute to the greatest sprinter to ever  live, on his Facebook page, which has amassed just over 4,500 likes at the time of this report. The sprint legend captioned the post, “Jamaican producers link up..Put Sagitar on a track right now and me cover the bill.” 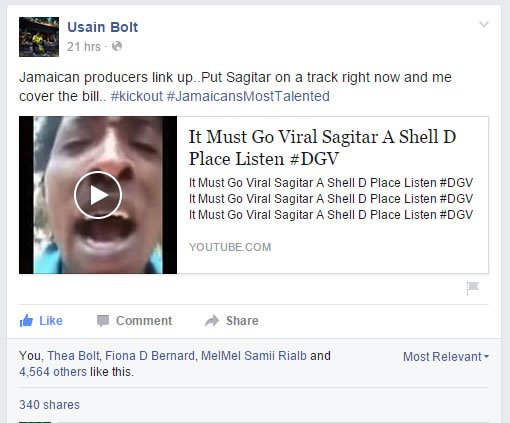 Well, with a caption like that, over 10, 000 fans, us included, watched the “It Must Go Viral Sagitar A Shell D Place Listen” video. What we heard and saw was more remarkable than terrifying. The video shows aspiring artiste Sagitar, born David Sagitarr, outside of a building singing.

Just before Sagitarr starts to deejay, a little boy starts beating a knife handle and a cleaver knife on what appears to be a table, creating a beat to compliment Sagitarr’s vocals. Watch the video below.

The was video uploaded to YouTube on 9 Jul 2015. That’s two weeks before Bolt clocked his 9.87 season best in the 100 metres at Sainsburys Anniversary Games in London on July 24.

Today we received a song titled “Usain Bolt Anthem” by Sagitarr from a producer via our radio station, PONdENDS, email address. The producer of Moby’s Records asserted that “the the video and song was recorded and uploaded before the race and before Usain made the post.”