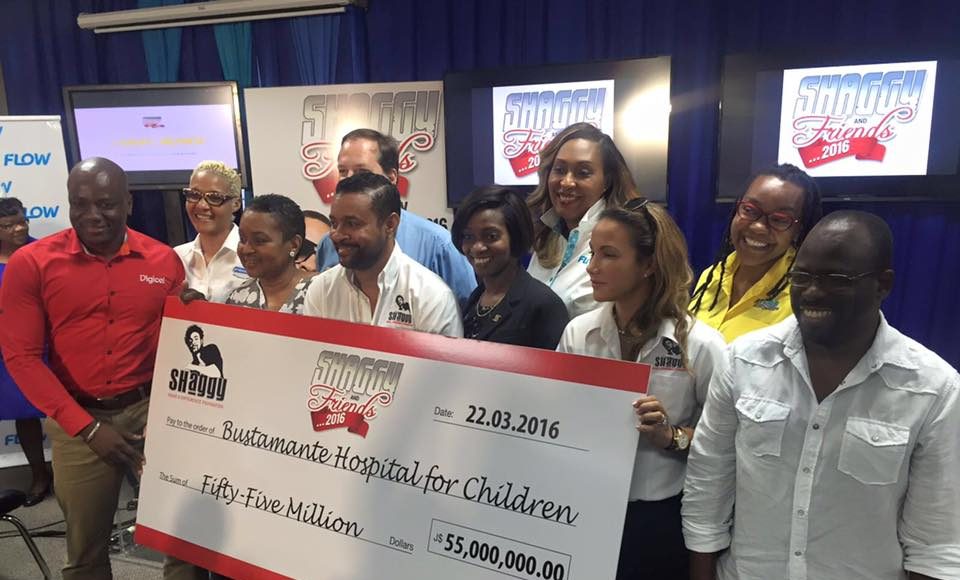 The Shaggy Make a Difference Foundation handed over a cheque valued at $55 million to the Bustamante Hospital for Children in St Andrew on Tuesday, March 22, 2016.

The money was raised during the ‘Shaggy and Friends Concert’ held on the lawns of Kings House in January. This year’s proceeds will go towards several different ventures in the hospital, including the Intensive Care Unit which currently has a total of five beds — far fewer than the required amount.

Orville ‘Shaggy’ Burrell, director of the Shaggy Make A Difference Foundation, thanked the Jamaican acts and sponsors who took the time to lend their support before handing over the cheque.

“The figure that we make is nothing compared to what we spend. What we make is a drop in the bucket from what we really need; however, we are grateful for all the support,” he said.

More than 450 pieces of medical equipment have been purchased with proceeds from biennial concerts already, according to Kenneth Benjamin, chairman of the hospital.

“Over 77,000 children are treated at this hospital yearly. This is the only children’s hospital in the Caribbean, so we attend to children from the region also. Shaggy and his team have proven that they are all about making a change and not just another avenue for talk,” said Benjamin at the handing-over ceremony.

This year Shaggy and Friends partnered with iHeartRadio, which broadcasted the concert on over 18 stations in the United States. However, Shaggy said while the radio station did their part, the Jamaicans living overseas were not that supportive.

“There are over four million Jamaicans living in the United States, more than who live in Jamaica. But the Jamaicans didn’t step up to do their part. We raised way less than we expected from them,” he said.

Managing director of the Wisynco Group, William Mahfood, handed over a cheque valued little over $8 million dollars to the foundation. During January, through partnership, three dollars was donated to The Shaggy Make a Difference Foundation and the Bustamante Hospital for Children from every specially marked bottle of WATA sold. WATA released two million of the specially marked bottles on December 22.

Since its inception in 2009, the concert has raised more than $255 million dollars for the Bustamante Hospital for Children.