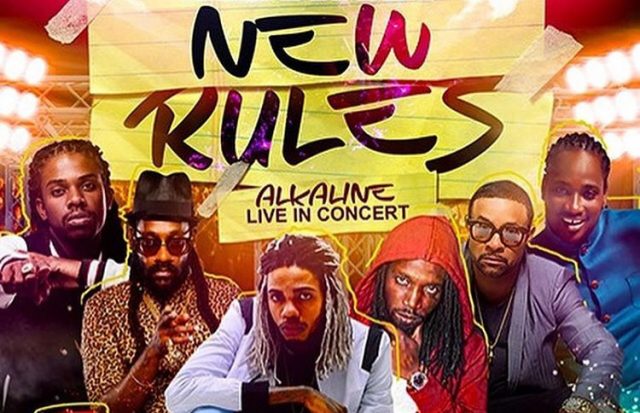 Alkaline is set to headline his first major concert ‘New Rules‘ in Jamaica in over three years on Saturday, March 25th .

Fans around the world will also have the opportunity to stream the highly anticipated event live online, which will be held in Kingston at the National Stadium car park and will see the headlining act backed by a live band.

Promoters Brownstone Entertainment and New Era Productions have secured leading acts in both reggae and dancehall to perform on a single unrivaled night to remember. The ‘New Rules’ concert will also feature Mavado, Shaggy, who will be performing on the bill alongside prolific acts Tarrus Riley and I-Octane, and the fast-rising artiste Jahmiel. Other performers include upcoming dancehall artistes Frassman and Deizzle. Patrons will hear juggling from some of Jamaica’s top sound systems: Swatch international, DJ Wessy, Flabba Dabba, DJ Cash Price, Coppershot Sound, Rebel T and DJ Banka.

Alkaline is coming off the heels of a banner 2015-2016, which included the success of his EP ‘New Level Unlocked,’ which topped the Billboard Reggae Charts. Other highlights for Alkaline includes millions of streams gained on YouTube for his singles and music video releases, and a collaboration with Sean Kingston, and other noted moments of prominence. He has not performed on local soil since his explosive popularity during this period, making Magnum New Rules the most anticipated concert in Jamaica.

Apart from the exhilarating performances in store, the Magnum New Rules event will also feature select pieces from Alkaline’s clothing line to be on sale as well as copies of this last album ‘New Level Unlocked’. Admission to attend are: $1,500 pre-sold, $2,500 at the gate, and $5,000 for VIP All-Access. The VIP All-Access ticket will allow attending patrons with free-flowing access to the side-stage during performances, coupled with a mixed-drink inclusive mega-bar, and a variety of food options for purchase.