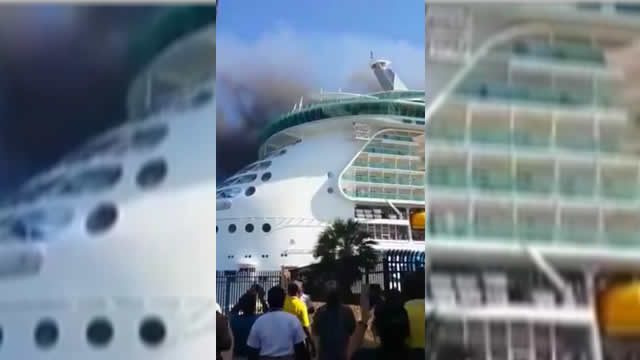 A Royal Caribbean cruise ship, Freedom of the Seas, carrying 4,000 passengers caught fire as it arrived at the Falmouth Pier in Trelawny at approximately 7 A.M this morning, according to a statement by Miami-based Royal Caribbean International. However, minutes ago tourism officials in say the crew aboard has contained the fire onboard.

The passengers remained aboard, while some sections of the port were been evacuated and no one, except the police are being allowed entry.

#FreedomOfTheSeas experienced a fire this morning in a mechanical space. The fire was contained & extinguished, all systems are functioning.

#FreedomoftheSeas is alongside in Falmouth, Jamaica, as scheduled, and all systems are functioning. — RCLcorp (@RCLcorp) July 22, 2015

All #FreedomoftheSeas crew members are safe and accounted for. One crew member was treated for a first-degree burn.

Adam Stewart, CEO of Sandals Group reached out shortly after:

.@AdamStewart @SandalsResorts @BeachesResorts Thanks for the offer! Guests should be off the ship soon to enjoy their time in Falmouth. — RCLcorp (@RCLcorp) July 22, 2015

The fire reportedly started at the top section of the ship, where a restaurant is located. It is believed that the fire did not spread to other areas. However, up to 8:30 a.m. there was still smoke coming from the Vessell, which is now docked at the Falmouth Pier. The 1,112-foot “Freedom of the Seas” is on a seven-night cruise that departed from Port Canaveral, Florida, on Sunday.

The ship was en route from Labadee, Haiti, with its next stop scheduled for the Cayman Islands. Meanwhile, an official from the Ministry of Tourism and Entertainment says the fire has been totally extinguished, according the Gleaner.