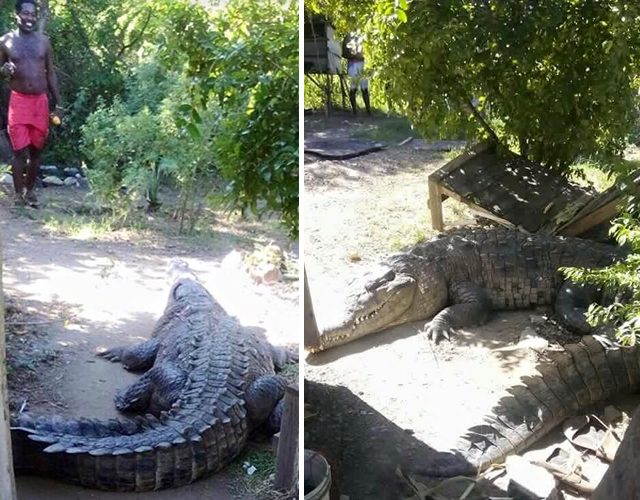 An 11-foot crocodile was found in the backyard in the community of Albion, St Thomas, on Thursday. No one was harmed, according to The National Environment and Planning Agency (NEPA), who was called to relocate the reptile.

Crocodiles are endangered animals and are protected under the Wild life Protection Act. This not a rare discovery. Albion is part of a natural wetland area, which is the natural habit for the American crocodile species.

Last November, a 6-meter, 450-Kg, crocodile was captured in Grants Pen of the said parish and was released back into its natural habitat by NEPA.

It is illegal to harm, capture, kill or have a crocodile in one’s possession. Persons found in possession of or caught harming the reptile can be prosecuted under the Wild Life Protection Act and can be imprisoned for up to 12 months or fined $100,000.

NEPA is advising the public to exercise extreme caution in areas close to swamps, wetlands and gullies as crocodiles are likely to be displaced from their natural habitats during this period of heavy rains. Persons are also advised to avoid bathing in or near rivers and canals as crocodiles are likely to move with flood waters and may be found in these areas.  Areas which may be affected include Portmore, St Catherine, South Clarendon and wetland areas in St Thomas and St Elizabeth.