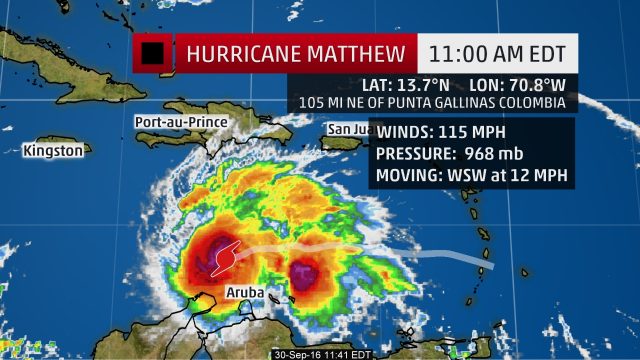 Matthew is now a major hurricane as it strengthened to a  Category 3 on Friday morning.

A Hurricane Hunters reconnaissance mission Friday morning measured flight-level winds a few thousand feet above the sea of nearly 120 mph north of the eye, prompting the upgrade to Category 3 status.

For now, impacts could begin in Jamaica and Hispañola (particularly Haiti) as soon as Sunday night, and in eastern Cuba as soon as Monday.

In addition, there is uncertainty regarding Matthew’s intensity as it nears those locations. Matthew may be stronger than the current forecast.

Prime Minister Andrew Holness is urging citizens to take all necessary precautions in preparation for Hurricane Matthew, which could impact the island as early as Sunday: “The Government is now officially on high alert in preparation for a hurricane. It may not come; it may divert, but our job is to be prepared. So I’ve officially placed the apparatus of the Government on alert.”

“The Government will do what it can; it will do its part, but I have to appeal to the individual responsibility of each and every Jamaican to look out for your own safety and security …Heed the warnings that are given from the Government, particularly warnings to evacuate,” he urged.

A tropical storm watch continues for the northern coast of Colombia. The hurricane watch for Curaçao and Aruba has been discontinued. Winds of 40 mph or greater are possible in northern Colombia on Friday afternoon.