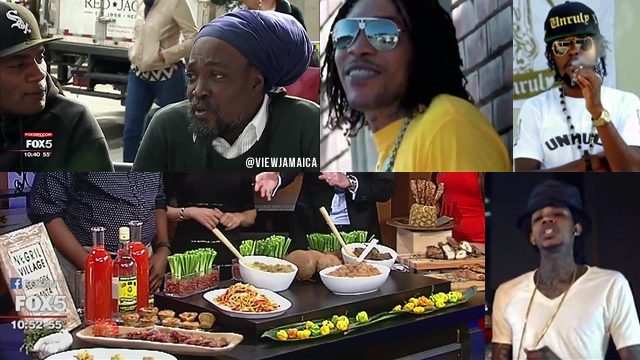 When most people think of reggae, Bob Marley is probably the artiste that pops in their head. But for decades Reggae and Dancehall has been inspiring hip hop and R&B performers along with others around the world.

On Wednesday night after Fox’s popular drama series ‘Empire’, Fox5Ny explored the ‘Influence of Reggae’ with reggae veteran Junior Reid, Hot 97’s Dancehall Djs Bobby Konders, and Jabba in a segment called ‘After Empire.’ The three entertainers go way back. They linked up in the early ’90s in Kingston; their relationship was built on mutual respect and love of the music. While Reid was dropping hits like “One Blood,” the two DJs were spoon-feeding it to the people in Brooklyn and Bronx and then worldwide.

Like many, the host seems to can’t differentiate between dancehall and reggae — which are two different genres of Jamaican music. “Who is responsible for reggae’s international influence?,” the host asked. “The popularity is undeniable. Look at artistes like Popcaan, Alkaline; what about Vybz Kartel?,” he continued. Those are dancehall artistes without a doubt.

The influence and relevance of the incarcerated dancehall legend Vybz Kartel was also in question, who after more than four years is still dropping hits and climbing the charts. You can also find him on Junior Reid’s new album. “Why is he still so relevant?,” the host asked.

A lot of people don’t know that Reggae gave birth to Dancehall and Hip Hop. 2015 marks 42 years since Disc Jock Clive Campbell, known as DJ Kool Herc founded the genre “HIP HOP”. Campbell was born in Jamaica, moved to New York in 1967, and picked up the nickname ‘Hercules’, (shortened to ‘Herc’). Without DJ Kool Herc, we wouldn’t be talking about hip hop now. We shared this tribute in 2013.

Bobby Konders and Jabba played some dancehall music including a slew of Kartel’s hits during their visit at the Fox 5 studio Wednesday night. The two founded Massive B record label 11 years ago. Since then the Massive B duo has become prominent voices in both the reggae and dancehall communities in the U.S. through their HOT 97 weekend show; which now has a new time: every Sunday from 9 p.m. to 11 p.m. They are not new to TV. In 2013, they performed on BET Awards’ Dancehall Tribute along with legends Beenie Man, Elephant Man, Dawn Penn and Chaka Demis and Pliers.

Fox5Ny went all out. They also featured some Caribbean cuisine to go with the island vibe. Sim Walker, owner of Negril Village Restaurant, which is known for some of the best jerk chicken in the city, was also featured. He had some Jerk chicken, curried goat, rice and peas, saltfish fritters and more for the hosts to enjoy. Watch below.