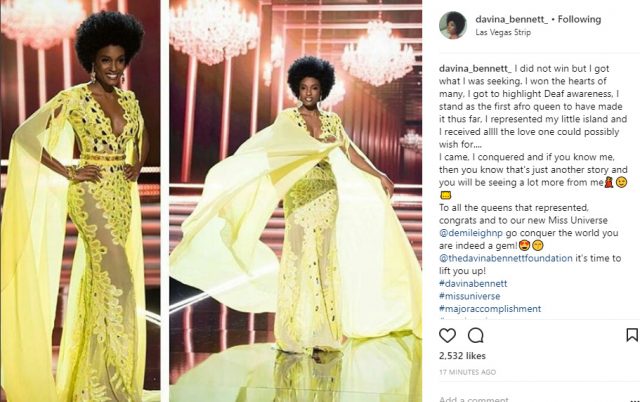 Davina Bennett received love and support worldwide last night from the minute she stepped onto the stage through to her Top 16 placement, Top 10, then the Top 5, and ultimately the top 3 at the prestigious Miss Universe 2017 pageant in Las Vegas, Nevada.

21-year-old Bennett emerged from 92 contestants to become the first contestant sporting an Afro to crack the top three at Miss Universe and the second Jamaican beauty to make top 3, joining Yendi Phillipps, who finished one spot higher, second place, in 2010.

In 2015, Jamaica’s Sanneta Myrie became the 1st contestant with dreadlocks to make it to Miss World Top 5.

“I did not win but I got what I was seeking,” Bennett wrote in an Instagram post this morning. “I won the hearts of many, I got to highlight Deaf awareness, I stand as the first afro queen to have made it thus far, I represented my little island and I received all the love one could possibly wish for. she added. “I came, I conquered and if you know me, then you know that’s just another story and you will be seeing a lot more from me???
To all the queens that represented, congrats and to our new Miss Universe @demileighnp go conquer the world you are indeed a gem!??
@thedavinabennettfoundation it’s time to lift you up!