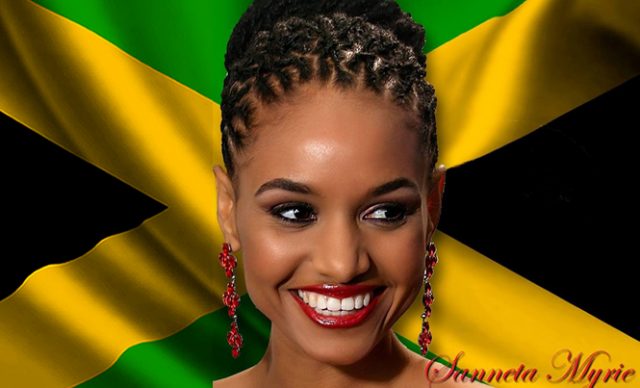 Meet Miss World Jamaica 2015, Sanneta Myrie. She says that she’s on a quest to be “purposefully beautiful” to the island and to the world. Myrie will be representing Jamaica as a contestant at the 2015 Miss World pageant on December 19.

Myrie is now the 1st ‘Miss World’ Top 5 Contestant With Dreadlocks, though it has been widely reported that she’s the first beauty queen with dreadlocks to make it into the competition, according to recent reports. However, that’s not so; Miss Martinique 2009, Ingrid Littré, was the first — she made Top 16.

Dr Myrie admits that she rocks her locks in honor of her Jamaican roots. “I lock my hair because I identify with it. I am very much rooted in that Afro-centric nature, where we as Jamaicans are rooted. It’s my expression,” she said in an interview.

Since being crowned in August, this proud and poised Jamaican has been busy preparing to represent Jamaica on the world stage. The pageant kicked on November 20, 2015, with the final show taking place on Saturday, December 19 at the Grand Beauty Crown Theatre in Sanya, People’s Republic of China.

In her introductory video uploaded on Tuesday morning, Myrie proudly declared that she represents the “biggest little dot in the world, Jamaica,” before stating, “On this island, there’s a natural mystic blowing through the air.” The now fully qualified medical doctor moved on to describe the warm Jamaican Spirit and people of Jamaica.

“The only thing to eclipse the natural beauty of Jamaica is a spirit of its people,” she said. The beauty queen went on to describe the Jamaican Spirit as “one of strong resilience, creativity, and ingenuity.”

“I was born to a single mother in one of the harshest and most marginalized communities in the City of Kingston,” the 24-year-old revealed. “At the age of nine, the course of my life change forever after being adopted by a benevolent man with a caring heart and a selfless spirit,” she declared.

“My life was chartered from a little girl born into poverty to a young woman who, as a medical doctor, aspires to positively impact lives and inspire young girls to dare to dream and achieve those dreams — no matter their circumstances.”

She has many passions, but she has a strong passion for the performing arts; specifically dance. So we know what to expect in the talent segment of the pageant. Myrie graduated from the University of the West Indies last month, October 31.

Each year at Miss World the contestants are encouraged to partake in a charitable project which enriches the lives of others through hard work, selfless acts and fundraising.

Editor’s Note: An earlier version of this report stated that Dr Myrie was the first contestant with dreadlocks; that error has been corrected. She’s Miss World first Top 5 & 10 Contestant With Dreadlocks.