I AM A JAMAICAN
Home Tech Jamaicans Gave 100 Million Users on Snapchat a Glimpse of The 876... 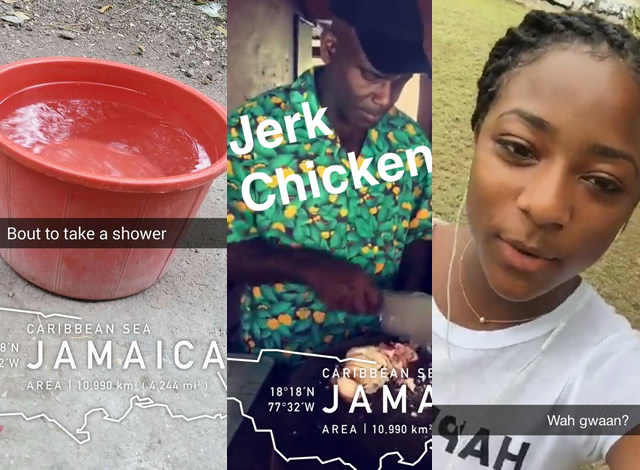 On Sunday, Snapchat notified users in Jamaica that on Monday Jamaica would be a featured location in their messaging mobile application for 24 hours. As part of its regular “Live Stories” feature, the idea is to give the app’s nearly 100 million daily users a look at what the Real Jamaica looks like.

Live Stories are a curated stream of user submitted Snaps from a specific location.

The company has been highlighting different cities/countries from around the world for awhile now to grow its user base.

This means that the Jamaican users of the application had the opportunity to give Snapchat’s users from around the world a glimpse what of life on the island is like with the use of photos and videos for one full day. And then, 24 hours later, they will all disappear.

After the announcement, naturally, a Jamaican wanted to know if the PM was going fix the road if he participated. #Jokes Check his location.

Another asked if he was suppose to dress properly for the day. #Jokes

Speaking with the La Times in a phone interview, a Kingston-based social media marketer said that people were excited for a chance to show off their country. “Some people think it’s just Bob Marley and the beach,” she said. “But we’re so much more.” More tweets poured in following the announcement:

The entire Jamaican Snap Chat population should just post “We want justice” and turn our pipes on. #JamaicaOnSnapchat #JamaicaLiveSnap

To see the clips hand-picked by Snapchat, the company which has a valuation of up to $20 Billion, users had to download the app, open it, sign up, swipe left, and click ‘Jamaica’ to see the clips curated by a curation team.

The first Jamaican Snap was cool. It showed one of our dancers dancing, naturally.

A 200-second video has been posted on our page: I AM A JAMAICAN

As our fellow Jamaicans watch their native counterparts’ clips, they shared their thoughts on twitter:

Somebody find his @ and let him know the entire Jamaica hates him pic.twitter.com/fsJO6xJruv — King Jaffy Jayfer (@JayHolness) September 14, 2015

U get mad wen foreigners have certain stereotypes of JA but u get a chance to fix those yet u play/snap right into them #JamaicaOnSnapchat — iB Konteh (@ibsoundsbetter) September 14, 2015

Lmao the fact that snapchat saw Jamaicans complaining about that guys snap and kicked his video off ???? #JamaicaOnSnapchat — Chanel Campbell (@Chanel_Designz) September 14, 2015

Some tried to get our food highlighted. You who made the cut here

After hours and a 120-second compilation by Snapchat’s curation team it was evident that:

Seems as if the person who is supposed to send Jamaica ‘global’ on snapchat is still asleep. #JamaicaOnSnapchat — K Δ O (@Khaos_Music) September 14, 2015

So a fellow yard-man took to twitter to say:

Dear snapchat, if you want some better stories.. Check we back pon a weekend please an thanks! — Kareem Murdock (@MurziFbaby) September 15, 2015